From saying there will be plenty of updates to come over the coming weeks and months back in August to finally posting something after three months! We've been working a bit on Bit Battle during that time but we've also been working on some open-source projects of our own that we hope to tie back to Bit Battle. To prove it, here's a screenshot below of the current progress: 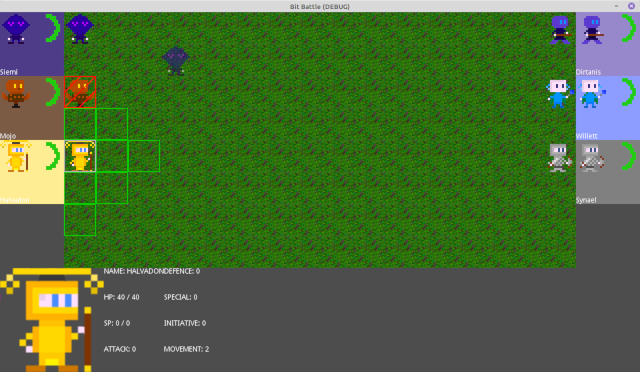 Here is what the example battleground currently looks like, with newly re-scaled sprites from our v3 character designs and new names for all characters. We've got some basic movement, state and statistic tracking for each character and while it's not pretty, it's at least some progress and something to show instead of nothing over the past 8 years - an upgrade surely!

Our main focus at the moment is attempting to integrate our Quartz Game API that is being developed to track matches played within Bit Battle to store for future analytics tracking. It's an exciting project that will be expanded upon to become more generic, allowing other turn-based games made in Godot using TileMap nodes to register their game activity.

Bit Battle will initially become a testbed for that API project but we hope to be able to re-visit the development on a grand scale very soon.