I think this is the third blog post in a row that is talking about a completely different subject matter. After speaking to people about what experiences I want to provide for others and in what manner, I've decided to A): make this blog a lot more personal and changing the language used and B): change what game I'm focussing on for my first proper alpha release in Q1 2021! So here's a proper update!

Italisco is a third-person adventure and exploration game, inspired by the Spyro the Dragon series of games. The main focuses for the 0.1.0a release candidate will be getting the first world and attached levels completed and in a good state for some playtesting via an Itch.io release.

So, onto some gameplay. Terrain manipulation is one of the MVPs (Minimum Viable Product) that I've laid out for myself. I've started work on a terrain generator that accepts CSV file data and converts that to a set of terrain tiles that are placed in the 3D landscape. 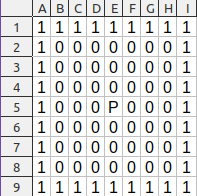 Based on the player position P and the height values provided, the landscape can be mapped out and generated as seen below with a small test dataset using the size of each terrain block as a multiplier:

It's a bit rough around the edges and the draw distance is rather short but it's progress! The sphere will be replaced with an actual character (more details to come on that in the next update) and more interesting and dynamic terrain. 3D is a far more difficult beast but I'm hopeful I can reach an MVP sooner than with the other ideas that I've had! Yes, it's still complex in some ways but I get a better feeling about the direction of this game than before. It's about testing a lot of ideas and seeing which ones you can drive home to a release state.

I want to start 2021 with some positive change rather than another abandoned product idea. Let's do this - if you're in the same boat, you can too.